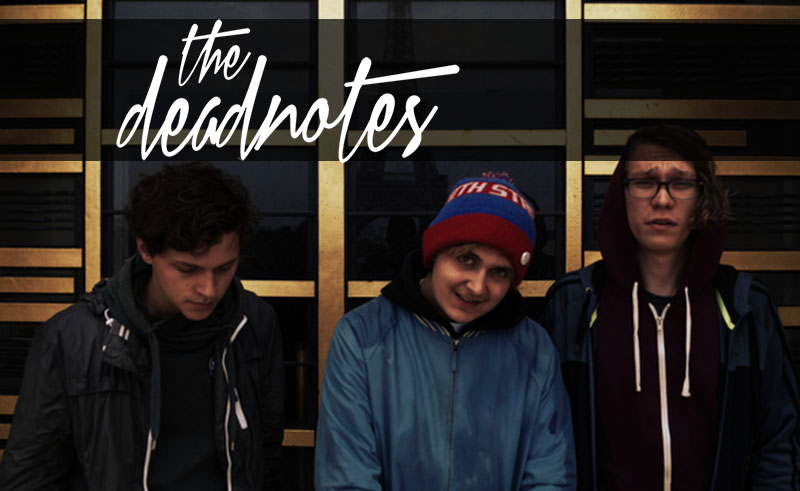 From Germany, today with us… “the deadnotes!“

Debut album “I’ll Kiss All Fears Out of Our Face” out  through KROD RECORDS!
The Deadnotes is an Indie – Pop/Punk band from Freiburg, Germany, which consists of three hardworking kids named Darius (guitar), Jakob (bass) and Yannic (drums).
Over the years, the band toured over mainland Europe, the UK, Russia – released a few songs – drove around ten thousand miles over cold concrete motorways – played shows in schools, beverage stores, garages, on boats or roofs – camped in cornfields and even played with some of our favorite bands such as The Front Bottoms, Riverboat Gamblers, The Smith Street Band, Gnarwolves or Red City Radio.
The Deadnotes recently signed at KROD Records for their debut album “I’ll Kiss All Fears Out of Our Face“, set to be released on October 7th 2016.

♦ What is the storyline/general idea behind this debut album?
We didn’t mean to write a concept album or something like that. We usually write music out of emotions such as daily sadness, depression, anger and even jealousy. We wanted to deliver an album that just comes straight from the heart and hopefully people can identify with while being in a bad way or are struggling with mental health.
I can’t really handle “happy sunshine” music, however the main idea was to write a positive record. We try to illustrate in our songs that things can get better as soon as you have some good people around you and you get the chance to let off steam and vent your anger.
♦ How did you approach the writing process?
When we usually write songs it always takes ages. Not only because we’re lazy sometimes, but even more because we’re all super perfectionist. We sometimes just hang out in our practice space and try to work out a 10s part of a song for maybe 5 hours. This time, we wanted to do it differently. We had a lot of ideas before but apart from 2-3 songs, the whole album was actually written within one week.
We were all a bit afraid that it might not work out well, writing songs under time pressure, but now afterwards, I’m sure we did the right thing. We didn’t want to have perfectly arranged songs but tried to set the focus on honesty, directness and straight from the heart writing. Most of the lyrics were written in the studio actually. We were all surprised because it felt so easy and freeing as probably never before to write songs/a record.

♦ Is it a relief for you to have it all done and finally about to be released?
Oh Yeah. It definitely is. We did a shitload of tours last year and somehow managed to write and record a full album in between. We started to do pre-recordings in June 2015 and were finished in the end of October just the night before heading out on a three weeks Russia tour. The whole recording process took a lot of time and the longer it took, the more exciting we were to finally show the stuff to our friends and fans. The record is something really special for us, so we didn’t want to rush anything but rather take all the time it needs for a proper release.
Also, a lot of work comes along with the album such as promo, further touring, music videos and stuff like that. I literally can’t wait to finally lean back when the record is out and just be a little proud about everything we did and worked out. However, we’re even more excited to play shows in Germany, Switzerland, Austria and France again and see a lot of good friends again.
♦ What do you hope your fans will take from this debut record?
People will get to hear 11 groovy Indie/Punk/Emo songs that include a lot of shouting, yelling and “fuck yeahs”. Slow music for fast people. It’s pretty much obvious that we’re really excited about how people will like the record and get along with the music and lyrics. Even though at some points the lyrics may sound super depressing this album is meant to be a positive one.
I aim to write music to feel better myself but always hope secretly that it will maybe have the same effect on external people. An important point in the relationship of band and listeners is always live shows. We’re a band that tours a lot and definitely regards itself as a classical live-band. That’s why we fondly hope that fans will like the record and most of all, as a result, come down to one of our shows.