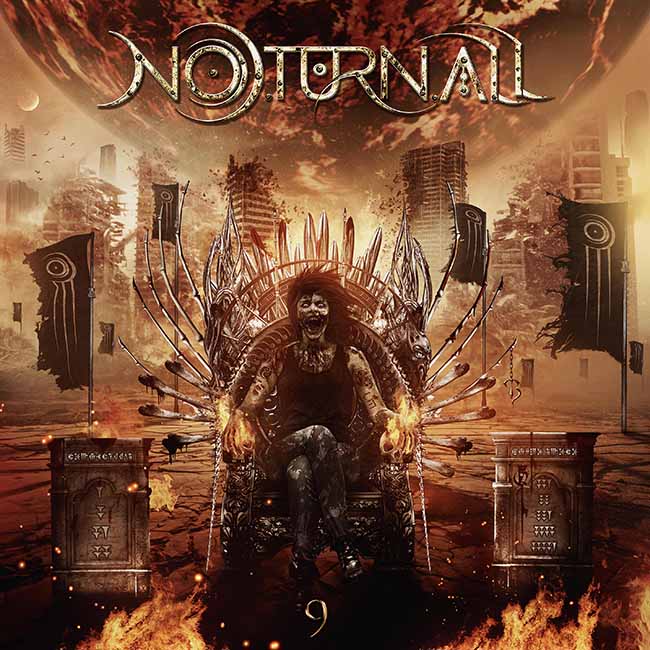 Everyone knows that Brazil has released many bands that have become reference in the heavy metal scene all over the world. But what happens when four members of these Brazilian reference bands get together to create music?

NOTURNALL is the name of the new heavy metal band from Brazil! Formed by very known and established musicians, the band soon became a top seller and participated in major tours and music festivals, such as Rock in Rio. Considered by specialized magazines, websites and newspapers as “the best thing” that happened in Brazil in the last decade, NOTURNALL adds an incredible amount of followers, and today is a big influence on the internet.
The newest 2017 release of the band is the album “9” (NINE). An album that brings back the roots of the bands´ members (Angra / Shaman), but with a heavier and more modern vocal and instrumental lines. “9” is a collection of what was best from the members´ old bands, and what stood out from the previous albums of Noturnall. With a cover art filled with puzzles and stories, the album is filled with exciting moments and intricated lines that lead the audience through several different atmospheres.
The album features guitarist Mike Orlando (Adrenaline Mob and Sonic Stomp) who had a brief period as a band member, contributing to the song “Wake Up”, one of the highlights of this work.

The third album from a band is an experience that can cause trauma or pull them to a higher success level. To some is a trial, to others is an opportunity. In the case of Brazilian quintet NOTURNALL, from São Paulo, their third album, called “9”, seems to be in their cards to reach a global success. First of all, we must have in mind that NOTURNALL is a band with five members with a long experience in Metal, with recognized works by media and public in Brazil and even in Europe. The fusion of their ideas resulted on a “full-length” that follows the same style from “Noturnall” and “Back to Fuck You Up”: a strong, technical and modern form of Heavy Metal with some influences from Power Metal and even from some punctual regional rhythms from Brazil. But on this new album, the band explored a more accessible and melodic side of their own personality. Their instrumental arrangements are easier to be assimilated for a broader part of the public. But don’t worry: their weight, aggressiveness and energy are the very same that we all know.

The sound quality of “9”:  Weight, aggressiveness, melodies, technique and all the musical elements are bound together in a perfect balance between them. The artwork was a creation of Carlos Fides (from Artside) is really beautiful evocation two tables with nine teachings, the teachings to create a better world, because the way we are, we’re walking the path of our own extinction. If “9” sound more melodic and easier to be assimilated than the previous albums of NOTURNALL, the quintet created another masterpiece. Songs such as “Hey!” (a song filled with contrasts between heavier and dense moments with fine melodic lines), the fine chorus and vocals of “Change” (with fine keyboards parts and great guitars), the fine technical approach of bass and drums on the harmonies of “Wake Up!”, the great guitar riffs and solo on “Mysterious”, the eclectic beauty of “Heart As One” , and the musical richness of “Pain” can be named as their finest moments on an album that all songs are the band’s finest moments. (Marcos Garcia, Metal Temple).