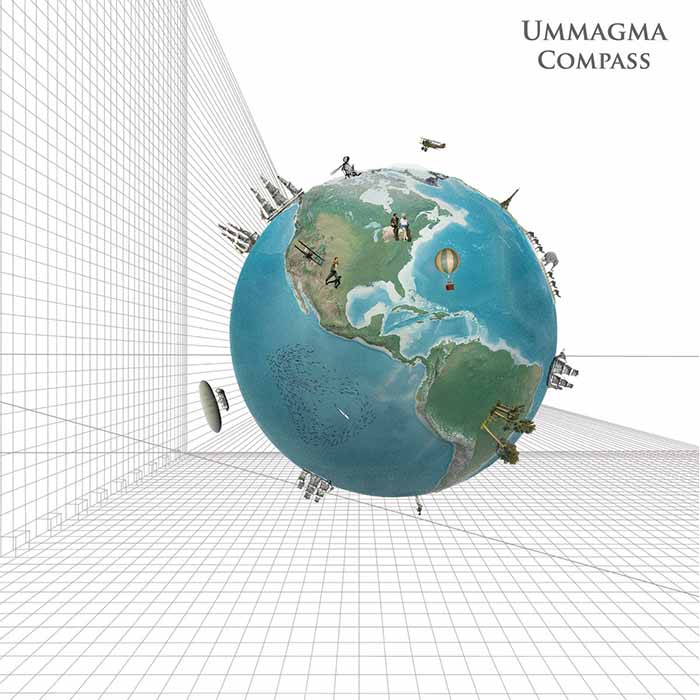 Indie pop electronic rock duo Ummagma has announced their new album ‘Compass’, to be released on July 26 via Manchester-based label Leonard Skully Records. Their third long-play, this is the duo’s first album in seven years and also the first time the band is releasing a record on vinyl. Ahead of this album, they present the ‘High Day’ single, a song about reflection on how short life really is and the need for reconcilation before it’s too late.

Formed in Moscow in 2003, McLarnon hails from the Yukon Territory in northern Canada while Kretov is originally from western Ukraine. Now based in Ontario, the couple completed this album over five years and multiple moves, ultimately hauling their studio with them across the Atlantic and setting up all over again. With such transience in the real world, how could their sonic world reflect anything other than the same fluidity and movement?

“High Day was inspired by a stupid argument we had as a couple. I don’t even recall what it was about, but it was frivolous and I conscientiously chose to stay mad at Alex for a few days, carrying around this negativity with me. As we sat in separate towns, it dawned on me that it could be that way – we could be separated permanently – if we don’t just learn to let go of what is not important. I wrote this song and sang it to him. We got past our pride really soon and moved on. Music can be such a healing force,” says Shauna McLarnon.

This single follows ‘Caravan’, which was released with b-side ‘Ty i Ya’, with Alexander Kretov performing in his native Ukrainian language. This is the band’s first single released in a language other than English, stepping beyond the confines of past songwriting limits.


Comprised of 12 tracks with a bonus track (‘Bouquet’) offered for the digital version, ‘Compass’ is beguiling in its post-genre nature. It is an album of grace and change, of familiarity and exploration, of emotion and euphoria, of sky-scraping cinematic highs and intimate and intriguing lows. This is the sound of a band allowing themselves to jump creative divides, to kick down musical barriers, and rip up the rule book or perhaps just ignore the fact that there ever was one in the first place.

This forward thinking collection of songs is not bound to fad nor fashion, time or place. Every shimmering dreamscape found here is balanced with more robust and driven grooves, sometimes even within the same song. ‘Otherwise’ projects a drifting, woozy platform through which they thread reggae infusions and delicate distant Spanish guitars into something sultry and solid yet ethereal and chameleon-like. ‘Galicticon’ hints at Vangelis-inspired soundtracks, ‘LCD’ is a strident rock urge, warped and woven with strange musical motifs and gorgeous glitches, and ‘Bouquet’ is an otherworldly slice of balladry.

This record follows on the trail of their ‘LCD’ EP with Robin Guthrie (Cocteau Twins) and Dean Garcia (Curve), and ‘Winter Tale’ EP with 4AD dreampop pioneer A.R.Kane. Both of these were released in 2017.

They say you can tell a lot about someone by the company that they keep, and the same holds true for a band. Ummagma’s collaborations speak volumes. Apart from these three dreampop-shoegaze icons, they’ve worked with Orchestral Manoeuvres in the Dark’s Malcolm Holmes, Swervedriver’s Graham Bonnar, and nudisco kingpin Alexander Robotnick.

Ummagma’s music has always presented an exhilarating positive vision, showcasing their ability to wander diverse musical pathways. Representing Ukraine among 23 countries, they won the Alternative Eurovision on Amazing Radio in 2013, and have been featured in a full-page spread in Rolling Stone Russia. In 2015, their collaborative ‘New Born’ album with Sounds of Sputnik also received a Jagermeister indie award, Russia’s most esteemed music award.