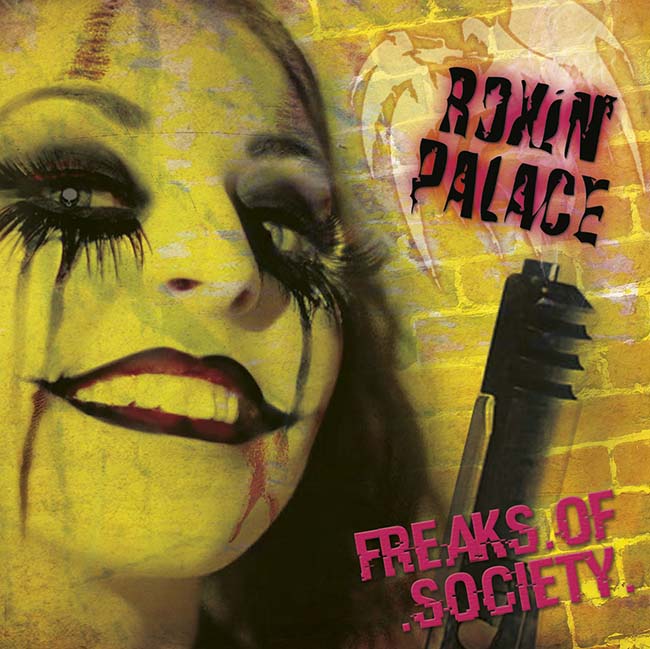 Freaks Of Society by ROXIN’ PALACE

High time for a direct confrontation course with real life!Born under the monicker Modern Middle Ages these casual bunch of SLEAZE HARD ROCK enthusiasts eventually became ROXIN’ PALACE and was founded in 2011 by Crown, guitar player in the bands Revoltons and Hell, ex drummer of Elvenking.For rhythm guitar duties Crown recruited his friend Slaver. Later they completed their blowing rhythm section with bass maniac Garret, who had many years of experience mainly in Hard Rock cover bands, and the young talented singer Axel, completing the line up in March 2012.ROXIN’ PALACE began recording the debut right away at the Artesonika Studios, putting together 10

tracks. Later the group started its live activity sharing stages with acts such as Phantom X (USA), Salamandra (Czech Rep) and Jettblack (UK). The album was mixed by swedish producer Staffan Karlsson, and has been released on June 7th, 2013 by the Germany company SAOL Music.To promote the debut release, ROXIN’ PALACE has been busy again, on an intense live activity, culminate with new shows in Czech Republic and the presence at prestigious festival Metal Days (Slovenia) together with acts such Obituary, Satyricon, Manilla Road.During the fall of 2014, ROXIN’ PALACE faced an important change replacing singer Axel, guitarist Slaver and bass player Garret with new members: Al (vocals) and Gian (bass).The new line-up wrote songs for a second album and the new release “Freaks Of Society” has been released in October 2016 via established record company Sleaszy Rider Records.

“Freaks Of Society” is full of pure life and brings back easily lots of the great positive feeling out of the 80s, when popular acts like Mötley Crüe, Guns ‘N Roses, Skid Row, Dangerous Toys, L.A. Guns, Bullet Boys, Roxx Gang, Ratt, Faster Pussycat, Vain, Bang Tango, Shotgun Messiah were a real big thing! Let’s get back to the thrilling rockin’ spirit of these colorful times with ROXIN’ PALACE!