Modus
by Nature of Wires 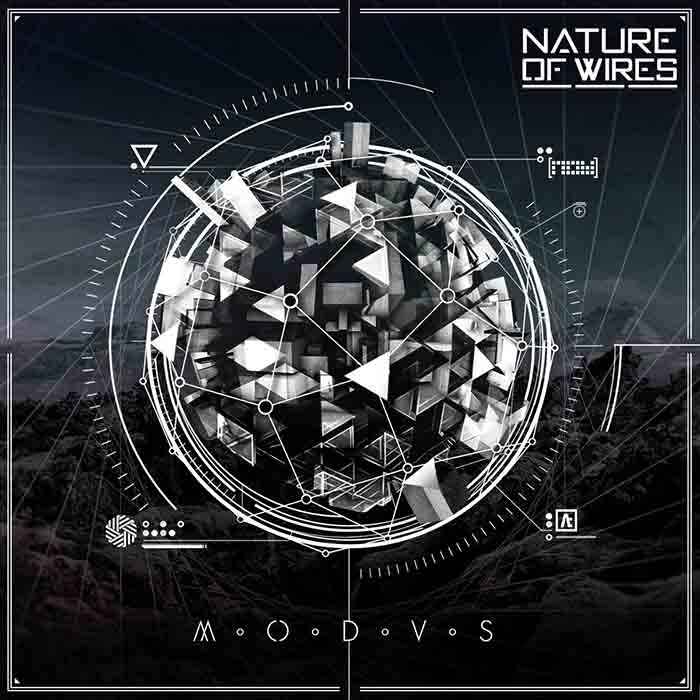 British synthpop stalwarts Nature of Wires present their new double album ‘Modus’, out on August 16 via Manchester’s Analogue Trash label. Comprising 18 tracks, this is 80s-influenced synthpop with a dark edge. The album had its genesis in the late 80s and early 90s, when the band were in the middle of a creative hot streak.

Ahead of this, the trio have released ‘Harry’s House’ as a 2-track single, including the original and a New Order-inspired remix by British post-punk buzzband Klammer.
This follows up the single ‘Madame Serena’ with remix by electronic body music artist Leaether Strip, and the new video for ‘First Light’, along with remix by European electronic giants Mesh.

Nature of Wires was formed in 1986 in Herefordshire, originally comprised of Gary Watts (synths & programming) and Andrew Stirling-Brown (vocals). The band went on hiatus in 1994 until reforming in 2015. In 2016, they released ‘Cyber Rendezvous’ with California’s CountessM on lead vocals, their first album since 1993’s ‘Modus Operandi’. The band’s live shows were enhanced by the addition of Tim Powell-Tuck on electronic drums, with a UK tour and BBC appearances.

“Modus has been 33 years in the making and includes songs written between 1986 and 1993, recreated using 21st century technology.  We want to look back on this album in 20 years’ time and be satisfied that it is as good as possible,” says Gary Watts.

“So we’ve involved some top producers – namely Steve Whitfield (The Cure, The Mission, Shed Seven, Terrorvision, Jah Wobble) and Mike Marsh (Calvin Harris, OMD, Human League, Chemical Brothers, Moby, Shamen, Massive Attack, Erasure, 808 State, The Prodigy, Depeche Mode). Artwork is by the super-talented Vlad McNeally.  This is our final farewell to our younger years, representatives of the sound we created back then”.

CD1 features 8 original tracks, forged during a time of personal and musical change, and with striking clarity in this music and lyrics. But now, with access to top of the line music technology, Nature of Wires have refined and reinterpreted the inner soul and meaning of each song to create something that reflects an exciting time in the history of electronica and dance music, while also holding its own in the modern synthpop scene.

On CD2, Nature of Wires curated re-imaginings of tracks on CD1, offered by alternative electronic heavyweights Leaether Strip and Mesh, UK post-punk buzzband Klammer, and label-mates Room 1985, The Cowls and AtomZero. Applying their own vision whilst being faithful to the spirit of the originals, they’ve each re-interpreted the tracks in their own impeccable styles, adding to the sense of history that underpins ‘Modus’.

There’s a sense of finality to ‘Modus’, as well as a statement of intent for the rebirth of Nature of Wires, coming to terms with the past in a glorious and positive fashion, and preparing for an exciting future.

“CD1 presents the retro-electro, ‘lighter’ side of our writing, influenced by the synth-pop of the 80’s & 90s scenes. A ‘definitive’ version of the material we had back then, but with a modern edge. It brings together the core of our older fan-favourites and the very first song we wrote and one left unfinished in 1993, finally completed over 20 years later! We envisioned CD2 not just as a collection of remixes, but a deliberate companion or twin to ‘Modus’. This is not a double album; it’s a dual album,” says Andrew Stirling-Brown.

On August 16, the ‘Modus’ LP will be released everywhere digitally and as a 2CD digipak. It is also available directly from the artist via Bandcamp, along with single ‘Madame Serena’ and  ‘Harry’s House’. Nature of Wires will be touring the UK from summer to November.

Flood of Light by KAOUENN

Snake of June by 3+Dead

What She Could Not Tell by Beat Noir Deluxe

This website uses cookies to improve your experience while you navigate through the website. Out of these, the cookies that are categorized as necessary are stored on your browser as they are essential for the working of basic functionalities of the website. We also use third-party cookies that help us analyze and understand how you use this website. These cookies will be stored in your browser only with your consent. You also have the option to opt-out of these cookies. But opting out of some of these cookies may affect your browsing experience.
Necessary Sempre abilitato

Any cookies that may not be particularly necessary for the website to function and is used specifically to collect user personal data via analytics, ads, other embedded contents are termed as non-necessary cookies. It is mandatory to procure user consent prior to running these cookies on your website.