Pride & Disaster
by SLEEP ON IT 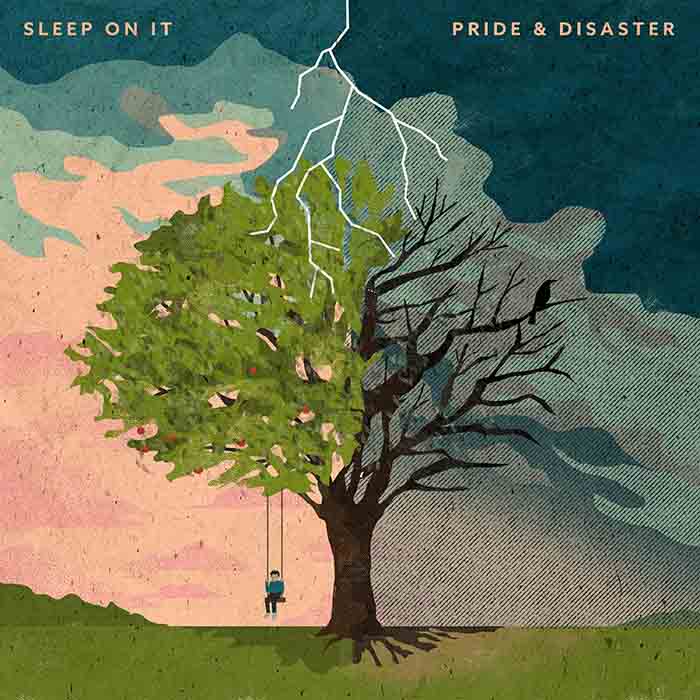 Sleep On It have announced their new full-length album, “Pride & Disaster”, out September 13th via Rude Records/Equal Vision Records. Fans can watch the music video for the first single, “Under The Moment”. “Pride & Disaster” is now available

“Under the Moment” was produced by Mike Green (All Time Low, 5 Seconds Of Summer, Set It Off). Speaking to the track, vocalist Zech Pluister said: “At its core, the song is a cry for help. I spent a lot of the last year struggling with my depression and anxiety, and without even realizing it I had fallen deeper than I really even noticed into those things”, he said. “‘Take my hand pull me again’ is a plea to anyone listening. The song also really tells the story of the struggle between the denial of those mental health issues, saying you’re fine, lying to loved ones to cover for yourself; and asking those same people for help from under the crushing weight of each day”.
“Pride & Disaster” is the follow-up to 2017’s “Overexposed”, and features additional production by Kyle Black (State Champs, Pierce the Veil, All Time Low). Since the release of “Overexposed”, the Chicago four-piece has toured with the likes of State Champs, Waterparks, With Confidence, Broadside and This Wild Life, and made appearances at a number of festivals including Riot Fest, Slam Dunk, and the Vans Warped Tour. Following “Overexposed”, Sleep On It was named one of Kerrang!’s ‘Hottest Bands of 2018’ and was featured on the 2018 Warped Tour Compilation album.
With “Pride & Disaster”, Sleep On It harnesses the strength and vulnerability of the human spirit. Over the course of ten songs, they make a case for enjoying life, even when times are tough, and never shying away from your truth.
“One of the big things we focused on when making this record was not only writing sad songs”, Pluister says. “Going along with the theme of growth, we wanted to show that there is more to life than just being sad. As hard as life is, there are still good days, and we really wanted that thought to be present in this record. It doesn’t seem fair to us to only portray the hard times”.
The positivity found throughout “Pride & Disaster” adds a silver lining to an album that is also unafraid to address the problems that many, including the band, face with mental health.
“We’re trying to be better every day”, says guitarist TJ Horansky. “And that’s what a lot of our songs are about. We want to be better people. We want to improve ourselves, and we want to help the people around us improve as well”.