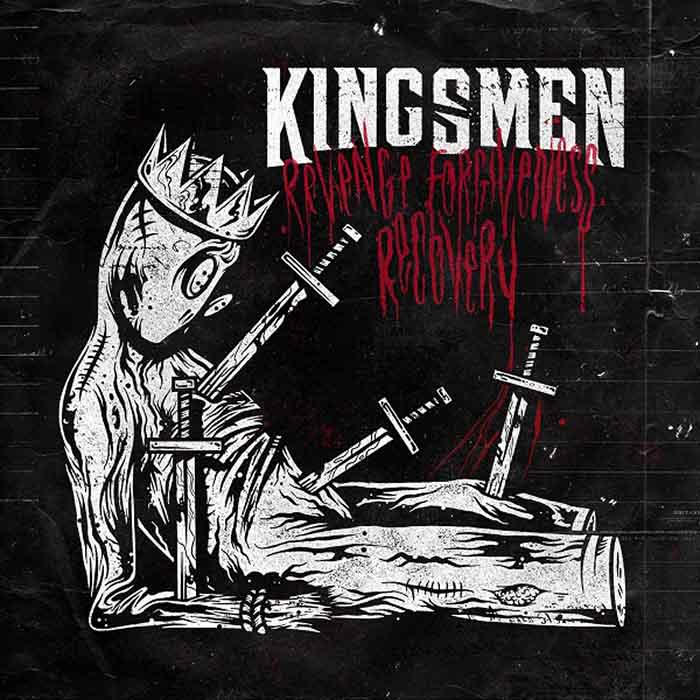 … “Nightmare”   The smallest state in the Union has produced a contender for one of metal’s fiercest bands! Rhode Island metal foursome KINGSMEN is entering the ring with a brutal, debut full-length album, Revenge. Forgiveness, Recovery, that’s out April 10th from SharpTone Records. Today, the band has released the incoming record’s first new song, “Nightmare,” via a music video. Melding blistering, face melting death metal and rapid fire, neck-snapping hardcore, KINGSMEN bring a new sense of intensity to the scene with their debut track, which divulges the long and troubled road to the completion of the album.

“Life isn’t always a beautiful dream,” says vocalist Tanner Guimond on the new song. “More often than not we are faced with challenges that are nearly impossible to handle. Our journey for the last few years has been full of sickness, death, misguidance and heartbreak. Our turmoil has led to the creation of our first full length album “Revenge. Forgiveness. Recovery.” This is the first single off that record titled “Nightmare.” This song is about embracing change and never surrendering your will because of hard times. So, take a listen and let us reach into the darkest parts of your mind.”

After a series of unfortunate events over the last few years that nearly ended the band, KINGSMEN buckled-down and poured their hearts and souls into writing their first full-length. Revenge. Forgiveness. Recovery was recorded in Nashville, TN with producer Mark Lewis (Trivium, Whitechapel, Cannibal Corpse).  Defying categorization, a singular style emerged at the forefront of the sessions. In the aftermath, they caught the attention of SharpTone who signed them in 2019.

KINGSMEN’s strength in songwriting, inspiring lyrics and a fresh, vicious take on metal helps define them among a crowded field of bands, while showing massive potential to be one of the scene’s most exciting breakout newcomers.

“When you listen to us, we want you to know there’s always hope” Tanner adds. “Our album was made during a dark period in our lives, we’re still here living, breathing, and loving life. We can only hope it helps and heals others through hard times. Kingsmen traditionally protect someone in power. To tie this to our meaning, we protect each other like a family. Through many trials and tribulations, we’ve always found the strength to persevere through our struggles together by making music.”