Tales of the Sacrosanct Man
by CULT OF SCARECROW

Recorded and mixed by Ace Zec at Studio Scampi, Belgium.
Released Sept, 10th 2021 by WormHoleDeath Records and Aural Music. Music and lyrics by Cult of Scarecrow. 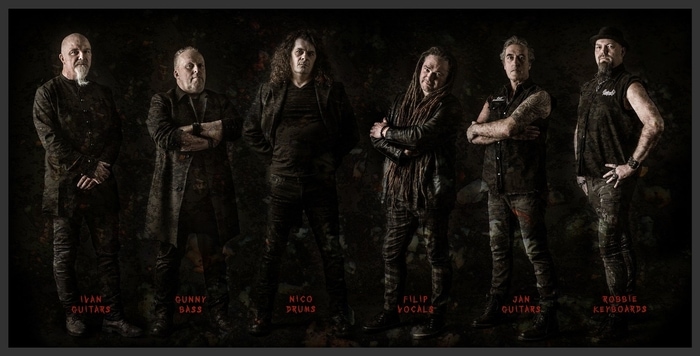 about
They called it quits in 1995, but in 2017 the band members of Die Sinner Die (with in their ranks mostly former members of the Belgian thrash metal band Dead Serious) got back together. The band members, more than 20 years older but with even more enthusiasm than before, started writing new songs. Influenced by various musical styles that each of the musicians had brought, a kind of grunge infused doom metal emerged. A number of experienced musicians were brought in to reinforce the whole: Eddy Scheire on keyboards made his entrance and gave the whole a more epic touch. Filip De Wilde was brought in as the new vocalist. The second song the band wrote was entitled ‘The Cult of Scarecrow’, actually a metaphor for a religion, a sect, that worships wealth and luxury. The members liked the title of the song so much that it immediately became the band’s new name. In November 2018, the self-titled debut EP was released, containing 4 songs, accounting more than 30 minutes of music. Nothing was left to chance: it was recorded and mixed at Oceanside Studios by Ace Zec, who previously worked with the likes of Spoil Engine and Diablo Blvd.
This debut EP was very well received everywhere. Especially the ‘dark atmosphere’ on the record and the strong song structure were very much appreciated and the album rightly received rave reviews. Shortly after the release of the album, drummer Jeannot Schram moved to Greece, left the group and was replaced by Nico Regelbrugge. With Nico in, a good number of gigs and festivals were completed. In the meantime, new material was written, ever evolving, layered and more accessible.
Due to Corona, almost all performances in 2020 were cancelled. Rehearsals and songwriting were forced to be put on the back burner. And finally keyboard player Eddy Scheire decided to quit. He was replaced fairly quickly by Robbie Eelbode. After the Covid smoke had cleared for the first time, the band picked up where they left off. Fan demand for a follow-up to the 2018 EP became very high. In late 2020, Cult of Scarecrow went back into the studio to record their first full album, titled ‘Tales of the Sacrosanct Man’. Again, Ace Zec took over the production (never change a winning team).
The album contains 8 songs, with more than 50 minutes of pure metal, which is situated somewhere between old-school epic metal and melodic doom, with a touch of grunge and a pinch of thrash metal.
In April 2021, the band signed a deal with WormHole Death Records for the worldwide release of ‘Tales of the Sacrosant Man’ (digital and fysical). A first music video, from the title song ‘Sacrosanct Men’, will be released shortly.

Italia - Chernobyl by The Talken

Black to Grey by CICATRICE

Behind The Resilience by KATRE

Void Inside by YASNA

Tales of the Sacrosanct Man by CULT OF SCARECROW

The Dawn Is Near by Oneiros Way