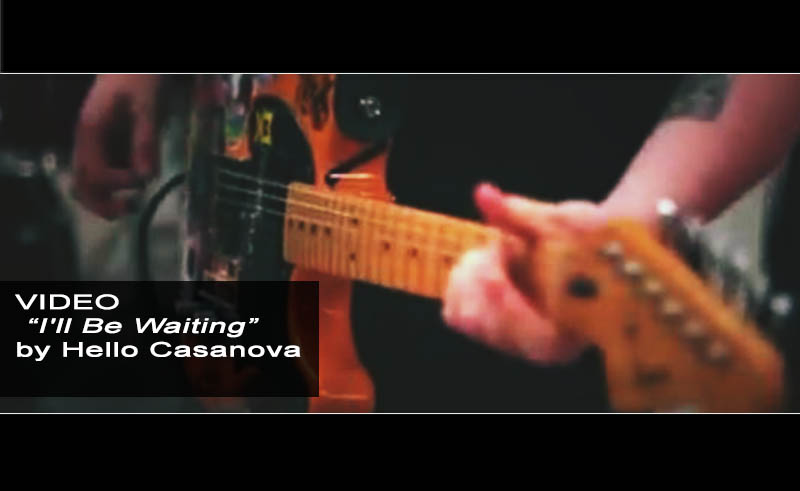 London-based Supersonic Media have announced the signing of Northern Ireland-based outfit Hello Casanova for their debut single ‘I’ll Be Waiting’.

Hailing from Armagh in Northern Ireland, Hello Casanova (previously known as Foreign Affairs) create solid edgy anthems with an Irish hook and large doses of positive energy. They write sweet and catchy pop punk songs about the world they’re living in. Their songs focus on heart, drive and passion for the pop punk genre, with every song conveying meaning drawn from their own real life experiences and issues.
Hello Casanova are Matt Irwin (rhythm guitar and vocals), Ethan Williamson (lead guitar and vocals), and Martin Miller (drums and percussion).
The single, a straight-up but edgy personal love song, was recorded by acclaimed producer Rocky O’Reilly (And So I Watch You From A Far, Fighting With Wire, Bella Union artist exmagician). Apart from an underlying Celtic-melodic guitar riff slightly reminiscent of Big Country, this composition also calls to mind such modern-day bands as Blink 182 and Green Day.
Shot at Wreckless Skatepark in Gorey, Ireland, the accompanying music video captures the live energy of a Hello Casanova show, presented in combination with unique visuals, featuring up-and-coming Irish skaters and bike athletes. Filmed by Jack McNally, Sam Frisby, Chris McEvoy and Rob Cook, the video was edited by Ethan Williamson.
“The music video features people from the age of 6-26, all skating around and having a great time while we perform,” explains Hello Casanova frontman Matthew Irwin. “Pop punk can be cliché. It can be the same three chords over, and it can be all chorus with the rest filler. We set out to try and give pop punk a different angle – to give all the heart that the genre deserves and to add our own spin on the sound”.
Their vast amounts of energy during shows, along with fabulous crowd interaction and passion, have taken them as far as the west coast of the United States. Their live show is a cut above, bringing their infectious mix of Celtic-tinged rock and punk to many.
“I’ll Be Waiting is the happiest song we’ve ever written! As Foreign Affairs, we put out a lot of serious tracks that were political, angry and very serious! Now, as Hello Casanova, we wanted our first track to be a positive burst of energy! This song details our singer Matt’s love for his girlfriend, who he’s been with for five years! We wanted it to be catchy, anthemic and have heart and we’re over the moon with the results! We’re currently heading to the studio to record our next single which we’re also very very proud of,” says guitarist Ethan Williamson.

As of November 18, this single will be released through online retail and streaming platforms internationally via Supersonic Media.

Songs About Leaving by Minus Hero

One Shot by LANDA

Most popular articles ever

This website uses cookies to improve your experience while you navigate through the website. Out of these, the cookies that are categorized as necessary are stored on your browser as they are essential for the working of basic functionalities of the website. We also use third-party cookies that help us analyze and understand how you use this website. These cookies will be stored in your browser only with your consent. You also have the option to opt-out of these cookies. But opting out of some of these cookies may affect your browsing experience.
Necessary Sempre abilitato

Any cookies that may not be particularly necessary for the website to function and is used specifically to collect user personal data via analytics, ads, other embedded contents are termed as non-necessary cookies. It is mandatory to procure user consent prior to running these cookies on your website.