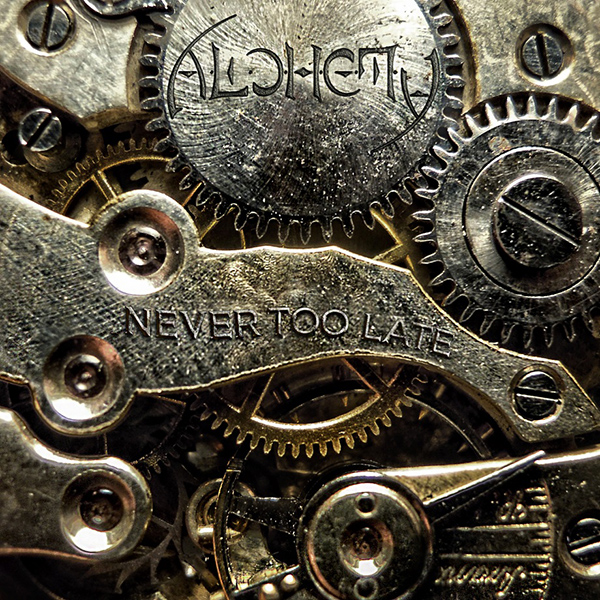 Hello, “aLLternatives” people … today we present you an italian hard rock band from Brescia. They realized their own first LP in may 2016 and now we will do listen some tracks from this LP and also some news…

The rock band Alchemy rises from the ashes of Marcello Spera (lead vocals and rhythm guitar) and Cristiano Stefana’s (lead guitar) past musical experiences, joined after some time by Luca Cortesi (drums), Matteo Castelli (b

ass) and Andrew Trabelsi (keyboards and guitar). The band records its first EP, “Rise Again” in April 2013, and the live shows then begin. They take part and win “Bovezzo Let’s Rock” contest, gaining the possibility to play on the important stage of “Rock Party” festival. From then on, the live activity continues constantly, until the great occasion on March 14th 2014, when they opened for Don Airey (Deep Purple) and Headless (with Goran Edman, former singer of Yngwie Malmsteen).

In May 2014 Alchemy are awarded the first prize in “Castello Rock” contest, organized by Atomic Stuff. Winning the

contest enables them to record new material, and to release their second EP, “D.A.R.E.D.”, containing live and new demo tracks. From March until May 2015 they take part to “Battle Of Bands Onstage”, a contest organized in the outskirts of Padova, winning the second prize and receiving very positive feedback from the jury members, Pino Scotto among them. As the live activity goes on in Lombardia, Veneto and Trentino, Alchemy finish the recording sessions for their debut album and signs with Street Symphonies Records.

“We may say that “Never Too Late” is a dynamic  hard rock album with AOR and progressive influences, heavily based on solid drums and bass, catchy guitar riffs and powerful vocals, all glued together by orchestral strings and synths, but this is not what it really means to us” – says singer Marcello Spera – “To us, “Never Too Late” is an album which tells you a story. The story of our past, of songs that were conceived almost a decade ago and were never born until now, of how we met, of the first rehearsals, of the sleepless nights spent on the arrangements, of the sleepless nights spent getting wasted, of the amazing live shows we played together, of friendship and love. It is the proof to ourselves that we must never give up on our dreams, because it is never too late to get them real”.

“.. Now it’s over
I can forgive no more
I can feel the fire burning in my heart
I surrender
I can take it no more
This is tearing me all the way apart..”

New song  out in October 2016 for on a Compilation “We Still Rock“.

A collection of unreleased and re-visited tunes coming from some of the most renowned artists of the italian melodic rock scene, is out now on Tanzan Music!

We Still Rock (The Compilation)