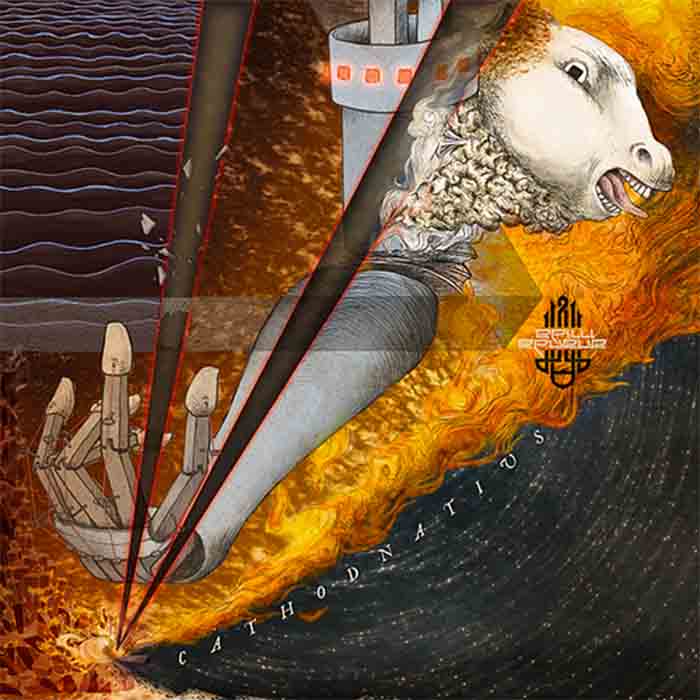 CATHODNATIUS is the second chapter of the psychedelic undertaking to investigate the soul of the tricerebral beings of our planet, examining in particular all the negative forces and the relative subtle vibrations lying outside and inside everything. Recorded at the Teatro delle Voci Studios in Treviso, it sees the collaboration of singer Conny Ochs, a valid explorer of the mythological cosmos created by the band.

“The pilot turns his head and checks on the controls, lights turns

through green and red, ignition, there he goes.”

Ananda Mida is stoner rock and psychedelia collective, leaded by Max Ear, former drummer of OJM and co founder of Go Down Records, and Matteo Pablo Scolaro, underground guitarist and curator of Go Down Bands on Tour, with the help of Eeviac artworks.
Since 2015, they have been playing, with different line-ups, from three up to six members, both instrumental or with singers, a seventies sound mixed with desert and psychedelia grooves. Their first release was the double A sided 7” called Aktavas / Passavas, which started the personal mythology of the band, elaborated from some fragments of an unknown teaching.
The debut album, called Anodnatius, out on autumn 2016, for both Go Down and Vincebus Eruptum Records, is an endeavor to remind all the positive forces and slight vibrations settled inside and outside everything and everyone.
In the second LP, Cathodnatius, scheduled for January 2019, they will present this time all the negative forces and obscure vibrations in which we live now, featuring Conny Ochs on vocals. They have been playing thru all Italy and part of Europe, collecting many show, supportino bands like Black Rebel Motorcycle Club, Fatso Jetson, Yawning Man, The Atomic Bitchwax, Avon, Tuber, White Hills and in festivals like Maximum Festival, Heavy Psych Sound Fest, Psyka Winter Psychout Fest, Keep It Low Festival, Dome of Rock, Cosmic Desert Winter, ACieloAperto.