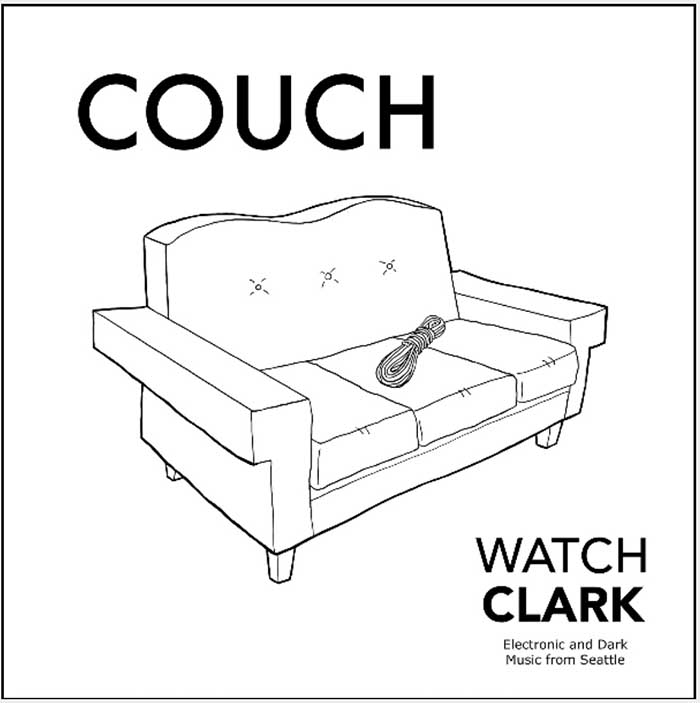 Seattle-based synth pop project Watch Clark is releasing ‘Couch’, the third full-length album. Featuring 12 tracks written from September 2017 to July 2019, the first of these to be previewed is the lead track ‘Choose’.

Watch Clark is the solo musical project of Paul Furio, producing a retro 90’s-style mesh of industrial and new wave electronica. Founded in 2012, Watch Clark’s sound is kin to that of the heyday of the Seattle indie goth/industrial scene of the early 2000’s. Formerly of Static Engine and Invisible Records artist SMP, Furio honed his music writing craft for two decades before releasing the first Watch Clark album ‘Perfect Imitation’, followed by the ‘First Week of Winter’ LP in 2017.

Focused on crafting songs that are danceable, political, relatable, and harshly honest, Furio tells a story with every Watch Clark album, although one whose context changes based on the perception of the listener. Furio lives and records music in Seattle, WA.

“Couch is a reflection on relationship, political, and life turmoil. I went through a series of dramatic changes while working on this album, from ending a long term relationship, to ending a career, and dealing with a political environment that seems to be spiraling into an authoritarian nightmare based on lies and deceit. Even the best moments of the past few years were fraught with self-reflection, captured most solidly in ‘The Act of Wanting’: Is there ever a limit to what will make us happy, or will we always be looking for something new, something more?” says Paul Furio.

“I was super excited to work with Lark Remy on the track ‘Weakness’. She has this amazingly expressive voice, and I’m so happy that we could work together on this song about longing and regret, that was written specifically for her as a co-collaborator. The final album also owes a lot to Kasson Crooker, who mixed and produced our previous album as well. Kasson has amazing talent and really brought the songs across the finish line with little tweaks that added so much polish and kept everything interesting.”

Watch Clark delivers an album that is cleverly layered in pronounced modular synthesizers and a heavy melodic aesthetic between light and darkness. This is a melodic kaleidoscope that sounds fresh while echoing classic synthpop artists such as Depeche Mode, not surprising considering that these British pioneers number among their main creative influences, along with Nine Inch Nails and Duran Duran.