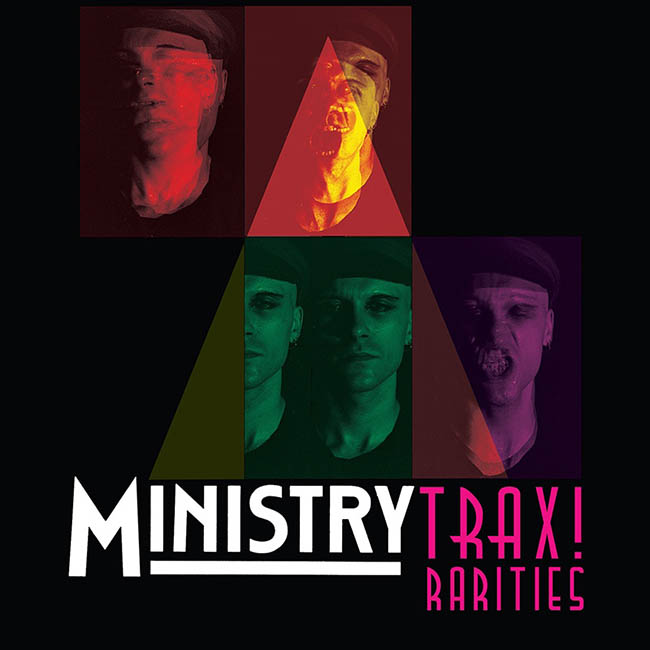 Scheduled for release on December 9th, this new Ministry collection will be pressed on clear vinyl with a printed inner sleeve.  Super fans will also be pleased to learn that this double LP includes the very rare Revolting Cocks track ‘Drums Along The Carbide!’

For over 30 years, Al Jourgensen has proven himself to be the undisputed king of industrial music, godfathering a genre that millions have grown to love. He is the only original member of Ministry remaining since the band’s formation in 1981.

Originally a new wave synthpop band with melodic and stylized output compared to to the more aggressive music for which they would eventually become known, as embodied in such tracks as ‘The Game Is Over’, ‘Let’s Be Happy’ and ‘Same Old Madness’. Ministry ultimately changed their style, resulting in them becoming an industrial metal pioneer in the mid-1980s. This ‘Trax! Rarities’ release celebrates hidden gem from their early days.

Ministry inspired numerous groups, including Nine Inch Nails, Marilyn Manson and KMFDM. Jourgensen continues to influence and morph, both in his style and music. While the latter is deeply rooted in Industrial, he is still creating new forms as most recently can be heard in his latest project SMM (Surgical Meth Machine).

A multi Gold and Platinum selling artist, his drive to entertain has seen him play the part of producer, musician, author and composer. Apart from Ministry, Jourgensen has led numerous side projects, including Revolting Cocks, Lard, 1000 Homo DJ’s, Pailhead, Buck Satan, and SMM.

Al Jourgensen is once again prolifically making music despite numerous challenges faced since the late 2000s, including the loss of his best friend and Ministry bandmate Mike Scaccia, which resulted in him taking a few years off from Ministry. He still performs select shows with Ministry. He has also acted in movies and wrote an autobiography, called ‘Ministry: The Lost Gospels According To Al Jourgensen’.