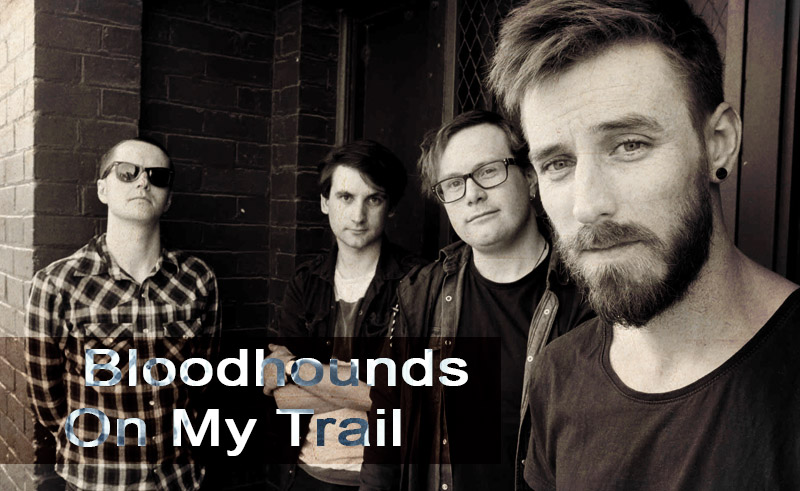 Bloodhound On My Trail

—————
Among a proud set of musical noise makers that have fostered a burgeoning shoegaze scene in Australia over the past few years is Melbourne outfit Bloodhound On My Trail.  Following a wave of accolades for their single ‘Over The Wall’, the band released ‘Haunted Isles’ EP  in November 18, 2016 preceded by the single ‘Places Like This‘.

Bloodhounds are Johnny Green (guitar, vocals), Chris Donaldson(guitar), Nik Donaldson (drums) and Ché Walden (bass). Producing music that brings to mind and heart such bands as Ride, The Jesus & Mary Chain, My Bloody Valentine and Chapterhouse, Bloodhounds On My Trail have developed a solid following among connaisseurs of bliss, densely-drenched and atmospheric guitar tones.

Since releasing their ‘Escape II’ EP via Moon Sounds (USA) and Raphalite Records (UK) in late 2015, the four-piece have received a string of praise from around the world and gone on to play live with virtually every key shoegaze band in Australia.

About the first single ‘Over the Wall, Bloodhounds frontman Johnny Green says: “I was hearing songs that contained a lot of imagery in them, which were telling stories in the way that is often done in folk music, and that inspired me to write this particular track”.

“Over The Wall is about a prisoner wanting to escape, whether he be dead or alive. He toys with trying his luck in the conventional break-out manner or hoping and even planning how he can die while still inside the walls of his jail. Regardless of the outcome, he will no longer be in prison and will consider it a successful escape,” explains Bloodhounds guitarist Chris Donaldson. “Our song ‘Places Like This’ is about being thankful to get out of a place that you once lived after returning to it years later”.

Bloodhounds On My Trail will once again release the ‘Haunted Isles’ EP through Moon Sounds Records, one of America’s most dynamic shoegaze labels and home to such bands as Ceremony, The Foreign Resort, Deaf Leaf Echo, Ummagma, The Vandelles, Sounds of Sputnik, Static Daydream, A*Star, Porcupine, and Follow The Sea.

“Mindblowing, interstellar odyssey of crystalline guitars and hallowing vocals… the perfect marriage between Slowdive and M83” – The Revue

“This is shoegaze at its best” – 33rpmpvc

Bloodhounds on My Trail