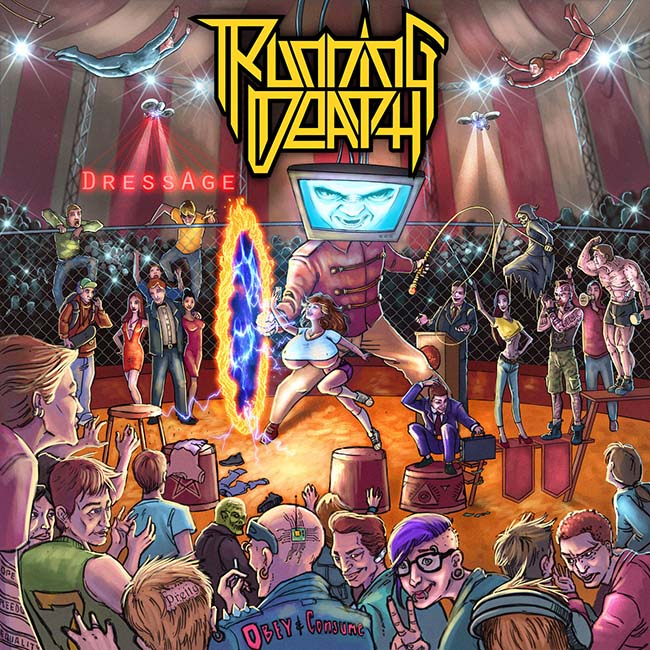 With their 2015 debut album “Overdrive” they triggered a positive as well as far-reaching surprise-effect as a vertical starter, which attracted a multitude of worldwide fans.

Countless reviews attested the band around guitarist and singer Simon Bihlmayer with their ‘dancing from the row’ material, a very own, upscale class. Encouraged by this, the songwriting became even more hungry, but also more settled and determined.

And now RUNNING DEATH are back with a new work: “DressAge” titled, the second longplayer presents the crisp rocking THRASH METAL of the Bavarians in so far unheard freshness and dynamics!

Whoever, as a new listener wants to get a route for orientation in advance – many sorts of references to Megadeth lead in the correct direction. For friends of such stylistics, it should be difficult in any case to resist ultra-melodic and discreetly progressive rhythm-grenades like “Heroes Of The Hour”.

Even on the textual level, there is deliberately thought-through content. Often written with a pinched eye, the quartet’s punctual lyrics are definitely the most readable in the genre.

With tracks like “Duty Of Beauty” for example, RUNNING DEATH humorously relate to the ever-dehumanizing fashion madness of today.

The natural, striking singing of frontman Simon, who already caused lively discussions with the successful debut-disk, breaks out of the ten new songs even more individual and uncompromising.

Even in the balladesque passages, the guitarist, as a convinced 100 % guy, simply inverts his innermost outwards with full emotion, instead of following the standards of the metier.

The detailed front cover for “DressAge” was created by the Mexican graphic artist Joel Sánchez Rosales, which was the perfect match for the lyrical relationship to the delicious dressage theme of the title song.  (Markus Eck)