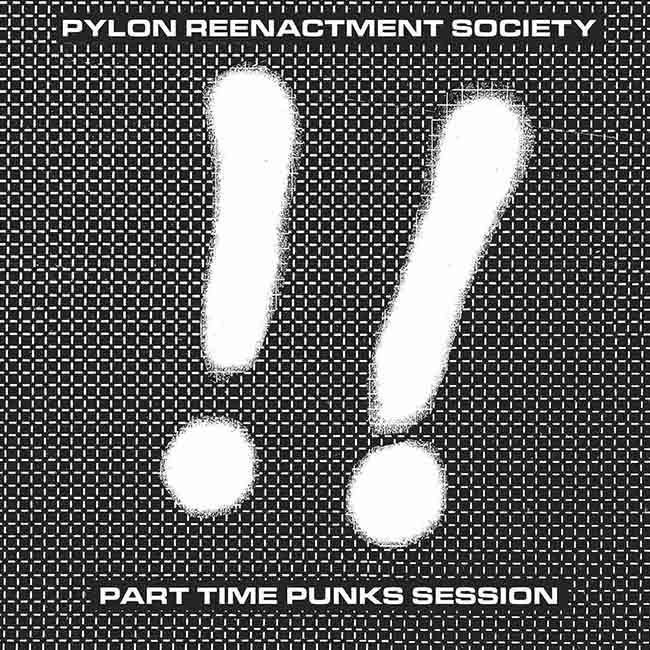 Pylon Reenactment Society will release their 6-song ‘Part Time Punks Session’ EP on Chunklet Industries, a hip Athens-based tastemaker record label founded by Henry Owings. Pylon Reenactment Society formed from the ashes of Pylon, one of the most influential bands at the outset of what became known as the ‘Athens, GA music scene’, along with other frontrunners The B-52’s and R.E.M.

Pylon Reenactment Society was founded in 2014, five years after Pylon’s celebrated history came to a sudden end in 2009 with the death of guitarist Randy Bewley. It is fronted by Vanessa Briscoe (now Briscoe Hay), whose inimitable vocal textures and phrasing defined the band’s sound for most listeners. Pylon was, and always will be comprised of Hay, Bewley, Michael Lachowski, and Curtis Crowe.

The ‘Part Time Punks Session’ EP was recorded in December 2016 just hours before the band played the Part Time Punks series at Los Angeles’ Echoplex. In the spirit of renowned DJ John Peel, Part Time Punks DJ and organizer Michael Stock invited the band to visit Josiah Mazzaschi’s studio The Cave in order to record exclusive tracks for his ‘Part Time Punks’ radio show, a show on KXLU that has earned a cult following since 2006.

“I was struck by the energy of the performances and the quality of the recording. It reminded me somewhat of Pylon’s recording of ‘Gyrate’. That record had also been done very quickly with the band playing together and a minimum of overdubs,” says Pylon Reenactment Society front woman Vanessa Briscoe Hay. “This way of recording can lend a dynamic live feeling if done properly and if you have a good performance. An elusive goal had been achieved and not really noticed for what it was: something really good.”

In Pylon’s prime, they were every Athens band’s favorite local band. Their musical naïveté, southern upbringing, art school smarts, and house-party roots exploded together to create something quite improbably amazing, simultaneously hitting the listener on a mental, physical, and spiritual level.

Pylon Reenactment Society happened when Athens’ artist Jason NeSmith, head of the music committee for the first annual Art Rocks Athens, was organizing an event exploring the 1975-1985 Athens art and music scene.  He asked Hay to perform a short set of Pylon songs.  Since NeSmith’s band Casper & The Cookies had previously recorded and performed with Hay as Supercluster, it was natural for them to back her at this event.  The response was very positive with the group then opening for Fred Schneider (The B-52s), touring with indie darlings Dressy Bessy, and performing shows in conjunction with the release of the ‘Pylon Live’ album.

What started as a one-off gig transpired into a tight touring unit. In addition to Hay and NeSmith, the band is rounded out with Kay Stanton (Casper & The Cookies) on bass guitar and backing vocals, pianist Damon Denton (Big Atomic) on keyboards and Joe Rowe (The Glands) on drums.

‘Feast on My Heart’ is special given that this is the only song Hay has co-written with someone from outside the band. Craig Woodall, member of Athens-based experimental band Limbo District, and Hay chose a section at random from Shakespeare’s least popular work ‘Titus Adronicus’, and translated the words into modern slang. A special chemistry was unveiled, as they took turn, in suit, consecutively writing these lines.

“Every song had a different approach to in the way it was created. We were artists before we were musicians and it affected the way we wrote, lived and performed. I wrote most of the lyrics for the band after the initial ones were composed by our bassist Michael Lachowski. Sometimes I co-wrote them with him,” explains Vanessa Briscoe Hay.

“I wrote the lyrics to the song ‘Crazy’ when I was going through some sad times and I broadened the personal feelings to more universal feelings as a sort of therapy. I have had various people tell me it is their Pylon favorite song, or their coming out song, or it helped them through some hard emotional times. Very humbling to have that affect on others. If anyone has a question relating to the writing process, I’ll be happy to answer them. That said, I still have no idea where ideas come from, they just do.”

All songs written by Pylon
Additional lyrics on “Feast on My Heart”: Craig Woodal