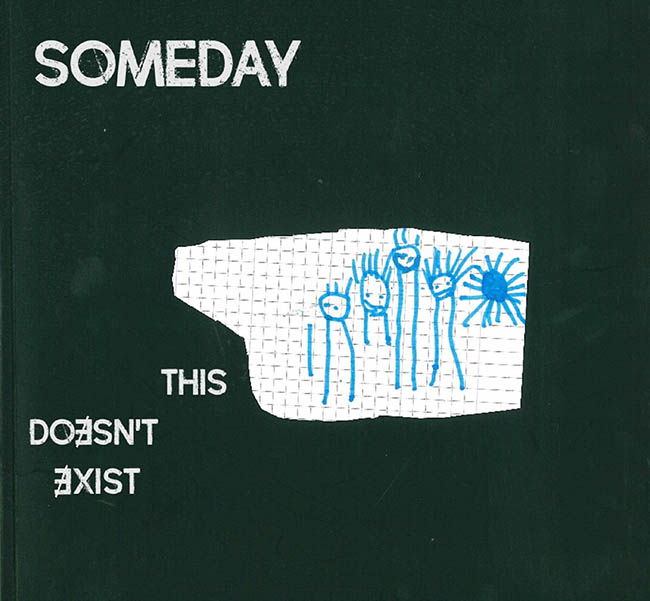 This Doesn’t Exist by Someday

—————
Seahorse Recordings presents the new 10-track album from Someday, called ‘This Doesn’t Exist’. Now based in Turin (Torino), this trio is comprised of Daniele Bianco, Michele Fierro, and Fabio Digitali. The first single from this album is ‘Last Lesson’.

This is Someday’s debut album, entailing a search for balance and essentialness that may be appreciated by fans of early Tokyo Police Club and Foals, Bombay Bicycle Club, Placebo, Born Ruffians, Hot Hot Heat, and The Stills. The band cite numerous influences, including early Sparklehorse, The Smiths, Joy Division, Placebo, Sonic Youth, The Cure, Paolo Conte and La Crus.

“Our song ‘Last Lesson’ was inspired by a true story happened some years ago, a very common and sad story. What happened made me think that, sometimes, when “something strange embraces you” and you think you are helpless, you just have to wait, nothing else… because maybe the solution is simple but you can’t just see it,” says Daniele Bianco. “”As usually happens with bands, the first album is a both a starting point and a goal… I hope it’s only the beginning because we have a lot of other stories to tell, and some of them are ready for the telling.”

“‘Last Lesson’ came about naturally, as it often happens when music works well… we play, we look in each other’s eyes and we know immediately that the song just works. It sounds sweet and disturbing… like the feelings we often feel,” explains Michele Fierro. “We are very happy because it is like we always wanted it to. Every song has its particular feeling and it sounds like we imagined. We can’t wait to play it live.”

Aptly titled ‘This Doesn’t Exist’, the lyrics from this album speak about what no longer exists, never existed and will never exist. Lead tracks ‘Last Lesson’ and ‘Clean Couch’ are about people or animals that have gone to a better place. ‘Little Choices’ cites that we have no more achievable choices. ‘Shelters and Picture’ note places that are no longer reachable. ‘Jokes’ explores imaginary lives built on a lie, while ‘Maurizio’ tells of lives that have lost something very important. ‘Forgotten’ reveals certainties that are nothing but obvious illusions.

Through this album, the band highlight the trivial occurrences of ordinary lives, with shifting musical trajectories between dark and post-rock (Forgotten, Waitings, Little Choices) to indie pop (Clean Couch, Shelters, Picture), as well as new wave and light psychedelia (Last Lesson, Gliding, Jokes). ‘This Doesn’t Exist’ is full of black and white atmospheres but celebrates the many shades of grey in between.

Someday was formed in Collegno, a city close to Torino (Piedmont, Italy) by two childhood friends – Daniel Bianco (guitar/vocals/lyrics) and Michele Fierro (bass). Initially rehearsing in Michele’s living room and Daniel’s cellar, they began making demo tapes, had several singles on Italian music compilations, and eventually released their debut EP “Flowers in the Cellar” and two singles ‘Divano Pulito’ and ‘Rifugi’ in 2016, produced by Luca “Vicio” Vicini of Subsonica. They were then joined by drummer Federico Segato to form a trio, who was subequently replaced by Fabio Digitali.

‘This Doesn’t Exist’ will be available digitally via key digital music platforms as of February 10 and is already available for pre-order on Someday’s Bandcamp. In late February, it will also be available on CD with distribution via Audioglobe.