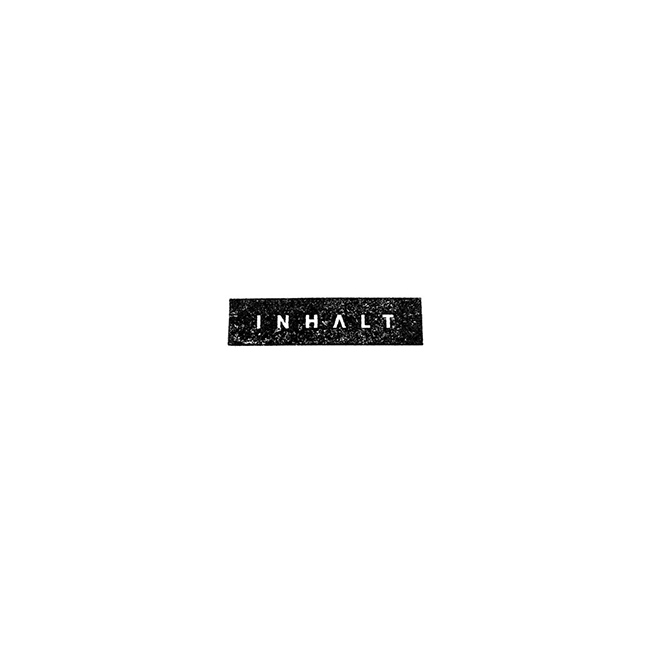 On April 14, dark electronic / minimal synth outfit INHALT will be releasing their new album ‘Part Time Punks Sessions’ via Cleopatra Records, who are giving a taste of the album by presenting the lead single ‘Walking on Glass’. Hard-driving, up-tempo, and propelled by German vocals, this and the other tracks offered on this release are sleek, chic and cold, formidably capturing the INHALT sound and ethos.

The ‘Part Time Punks Sessions’ LP features the best of the band’s signature synth-driven dark analog pop. This is both a live and a studio album, having been recorded in real time in collaboration with the Part Time Punks radio show in Los Angeles. This is the band’s fourth significant release and final album to be recorded at the band’s homebuilt studio, affectionately called “The Bunker”.

INHALT is German for “content”. This San Francisco-based trio is comprised of Philip Winiger, Matia Simovich, and Steven Campodonico. Winiger, born in Switzerland, visited San Francisco for a year long sabbatical but ended up forming the band with Simovich in 2009. They immediately recognized their mutual philosophy of sonic fidelity and creative integrity, rather than nostalgia.

For some INHALT will already be known, having released their first three releases on notable record labels. Their split 12” with London’s seminal World Unknown Records happened in 2011, followed by their “Vehicle” and “Occupations” EPs for San Francisco’s cult powerhouse Dark Entries Records. These waves of dark energy-filled output firmly established INHALT’s sound. What emerged was a well-defined pop sensibility informed by European Minimalism and a sincere, yet playfully cynical sense of humor. As much Kraftwerk as John Carpenter but with a pronounced drive of Moroder disco, INHALT’s sound has found home in both studious personal listening and the crowded dance floor.

“If we’ve been accused of putting too much time in the production process, PTP Sessions would be our antithesis; Done quickly, direct to multitrack analog tape, in a single take, capturing our live show, as it is, warts and all. We took inspiration from the John Peel sessions of days past, and worked in the spirit of that body of work from the performance, straight to the final mix down,” explains Matia Simovich. “It was a great privilege to be asked to do this by Michael Stock (who runs Part Time Punks), and we delivered something that we feel matches the essence of PTP: raw, honest, and on the border between the past and the present.”

Hot on the heels of the “Simulacra” remix EP for London’s Emotional Especial, INHALT not only ravaged the dance-centric anglo beat (fueled by remixes from heavyweights Timothy J. Fairplay and Black Merlin), but also found themselves in their ideal creative intersection: the road between the lyrical response to a challenging world, a sublime and elegant production technique, and the never ending pulse of the transistor rhythm machine.

On the concert circuit, INHALT have a reputation for bringing a tour de force wall of sound with an energetic stage presence. They have played concerts with peers old and new, including Front 242, Clock DVA, Martial Canterel, and High Functioning Flesh. They’ve condensed this raw concert experience into the John Peel-esque Part Time Punks Sessions, to be made available on April 14, both digitally and on CD, via Cleopatra Records with the vinyl release to follow.

The video for ‘Walking On Glass’ was shot, edited, and directed by Dmitry Semenov, one of the main visual collaborators for Recoil (Alan Wilder/ Depeche Mode).