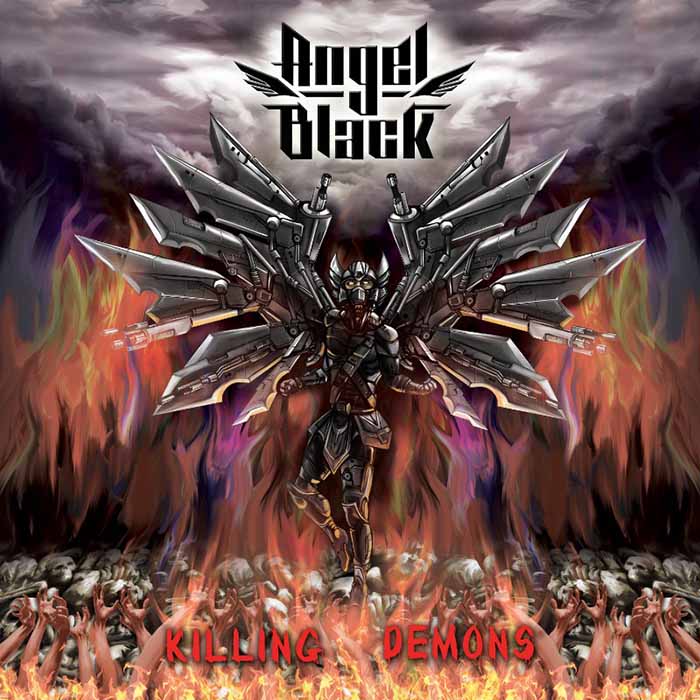 Rising out of Phoenix, Arizona, ANGEL BLACK will be releasing their debut record “Killing Demons” via Rockshots Records. As the band blasts into their first single “Black Heart”, one thing is clear, nothing is subtle about ANGEL BLACK. Big sound and melody set the mood for this classic heavy metal band. ANGEL BLACK doesn’t look to re-invent heavy metal, they clearly go after their fans with an aggressive assault for the ages.

The band comments on the upcoming debut:

“The concept of Killing Demons is that everyone has some kind of demon. Money, Drugs, Sex, Power. They can all be a demon if you let them. We feel we touched on a lot of them with the songs on the album. Strikeforce, touches on the armed forces that keep us a free world. Cyber Spy, talks about how much we let government into our private lives. Black Heart, is about those evil women that take you down. We play honest pure heavy metal from the heart and we think that Angel Black will be well received as a band that gives the fans what they expect. Music that you turn up loud and play over and over again.”

Angel Black was formed in 2013. The band got together with one thing in mind, to write powerful riffs with a classic metal feel. The band’s influences are steeped with the legends of heavy metal. From the opening riff of “Cyber Spy”, the first song the band wrote together. One thing was certain you don’t hear this type of metal, played with conviction, precision, and fire often.
Angel Black plays from the heart, forging their own brand of Heavy Metal. No Gimmicks, No Fads and No Fear of what they face in the ever-changing music industry. Their debut record is titled Angel Black “Killing Demons”. The title is fitting to all, we’re all fight something every day of our life.
The record was “Mastered” by well known Mastering Wiz, Nathan James at Vault Mastering. Nathan has Mastered many of the “hits” you hear every day on the radio. Nathan is well known and respected from his days as a mastering engineer at the World Famous Hit Factory in NYC.

The band has also written and recorded the song “Killing Me”. The song has been submitted to an upcoming movie under the guidance of the “legendary” Guitarist Freddie Salem, a one-time member of what was known as the Guitar Army, “The Outlaw’s”.